Yes. Reviews. They are really popular right now and I would like to do them too, yes, I am so mainstream.
But I really don’t know where I have to make reviews about. Most reviews I see are about fashion or make-up.
And to be honest, I am not really into fashion nor make-up. It’s not like I don’t wear make-up but it’s not more than mascara and eye-liner. No difficult eyeshadow patterns or problems with skintone. Luckily, I don’t deal with that.
So I had to think of what I can review about. First thing that came to my mind was food. Because I love food.
But lately I’m trying to eat more healthy so I can not allow myself to go eat all this unhealthy stuff. However, I could make reviews about healthy food! So, that’s the first thing of the few Í can review. I got this nice cookingbook for christmas, yes I know that that’s a while ago, and it has all vegetarian recipes!
As you can see it has a really nice cover! All the sticky note thingies are for which recipes I want to make, and they are quite a few!
This book is written by Alice Hart and she used pictures from Lisa Linder. I think it looks really nice! 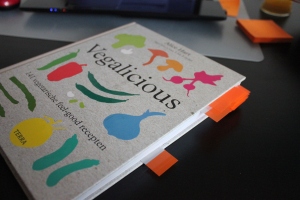 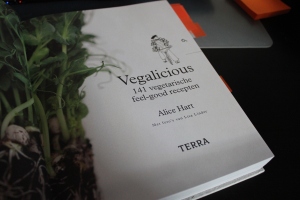 One of my favorie recipes, even though I never ate it, is the one of the ‘Ricottasnacks from the oven with advocado’
It looks so yummy to eat and I want it now! However, I think I have to wait for at least a week until I can make this, since my testweeks are over then. I’m going to try to make more recipes out of this book! 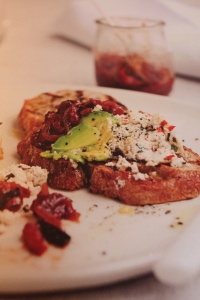 Also, this book shows you ‘different’ recipes like how you have to make ‘nutmilk’. It sounds weird, I know. I also really like how this is described and the drawings that are made to show it! 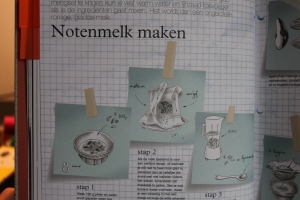 One more recipe I want to show you is the ‘Zomerse Terrine.’ I don’t know how to translate ‘terrine’ from Dutch to English, which also has to do with the fact that I’m not really sure what it means in Dutch. It looks like some sort of cake filled with bellpeppers. And I don’t even like bell peppers. But it still looks very delicious, so I’m going to try it once! 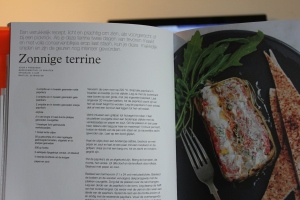 So, unnoticed, this was already my first review! I really look forward to actually making this food!